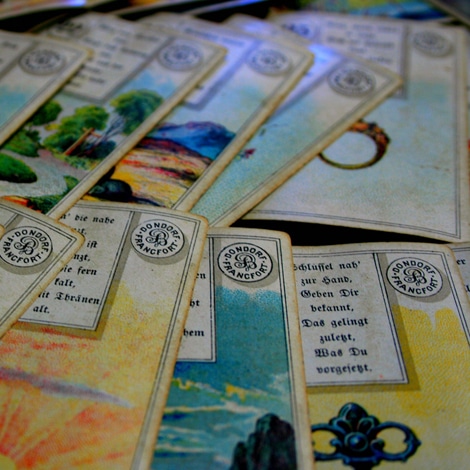 Psychic cards are tools that psychics, mystics and fortune-tellers have long used to guide their intuition, see the future and/or help you find the truth. On each psychic card, there is a picture or symbol that represents a metaphysical concept. When used in divination, the card/cards dealt to the seeker reveal future events. These cards are put down on a table face up in a variety of configurations known as "spreads".

No one is certain of the real origin of the first psychic cards (commonly known as tarot cards). The oldest tarot decks were hand-painted. Scholars and researchers believe that originally cards may have been created on pieces of leather or decorated wooden blocks. Most of the surviving ancient tarot cards are heavily worn by use and in poor condition. 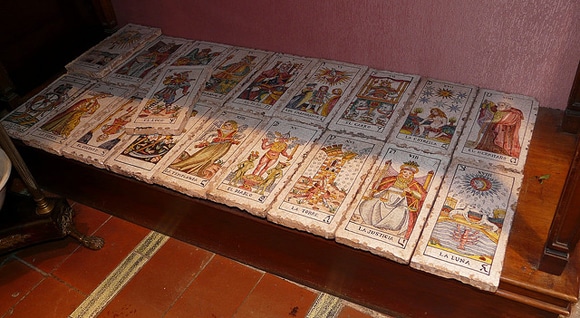 There is no real evidence that that proves these cards were around before the mid-13th century, but most of the symbols depicted on the cards are ancient. Many believe that gypsies were the original fortune-tellers/card readers. They were nomadic peoples that seem to have originated in India and the Islamic nations. As they traveled through Italy, France, Spain, and eventually to England, the tarot cards traveled with them. Versions of the fortune-telling cards developed everywhere and were handed down from generation to generation.

The earliest tarot deck that still exists date back to the late 1300’s; only 17 of its cards remain. They are thought to have been hand-painted for King Charles VI of France by the artist Gringonneur. 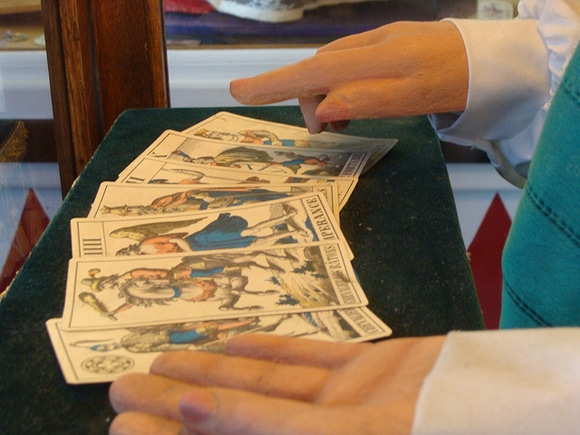 While certain cards, like the Juggler (Magus), The Devil, the Pope (Hierophant), Death and the Judgment card seem to reflect medieval European culture, others, like the High Priestess and the Moon, are pagan imagery.

Most basic decks are structured and numbered in two ways. The Trump cards are 22 cards which includes The Fool, which has the zero value.

The remaining 56 cards are divided into four suits. The most common traditional Italian suits are Swords, Batons, Coins and Cups. In modern tarot decks, the Batons suit is commonly called Wands, Rods or Staves, while the Coins suit is often called Pentacles or Disks.

Trumps are known as Major Arcana cards, while the while the rest of the cards are the Minor Arcana. Please note that the word “Arcana” comes from of the Latin word arcanum, which means “secret”.

The court cards show 4 each of the King, Queen, Knight and Page. Regular playing cards have 4 Kings, Queens, and Jacks (which are the mirrors of the Pages). 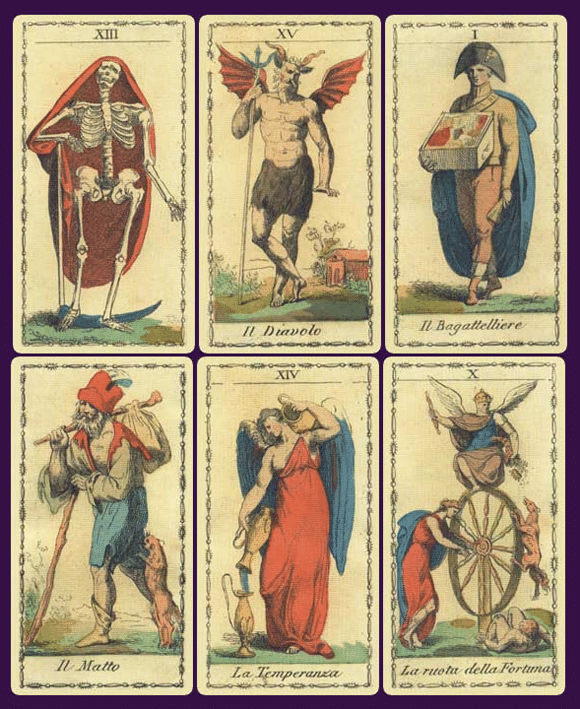 These psychic cards got their name from these decks, known as the “Triumphs” and later called “Tarocchi” which means “tarot” when translated from the French.

There are several types of Tarocchi decks that were developed in France and Italy in various regions.

Tarocchi of Venice (Lombardi deck), has the same structure as a deck of modern Tarot cards. Tarocchi of Mantegna, has five series of ten cards each. Tarocchino of Bologna has only 62 cards. There are no court cards. This deck may have been created by Francois Fibbia, who was the Prince of Pisa. 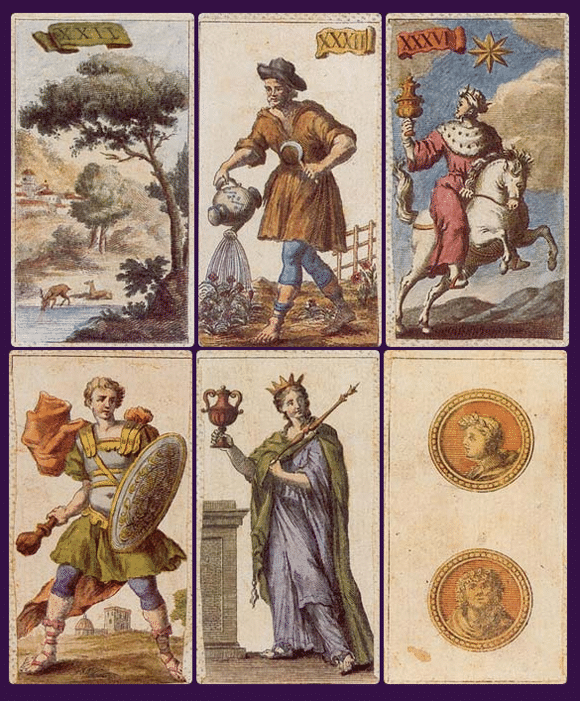 The Minchiate deck from Florence has 97 cards. The major cards represent the twelve signs of astrology, the four elementals (Earth, Water, Air and Fire) and four primary virtues (Faith, Wisdom, Hope, and Temperance). 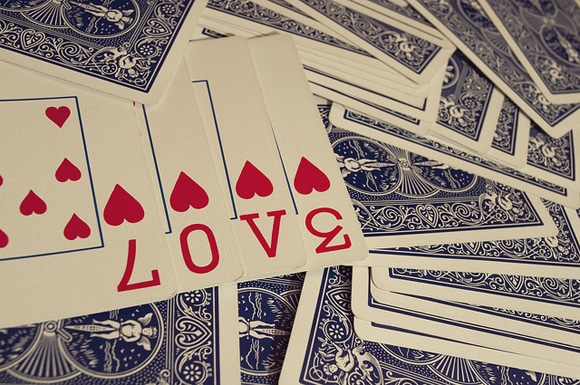 There has been a long relationship between Tarot cards and standard playing cards. Playing cards were first documented in Europe the late 1300’s. They were apparently used in Spain in the early 1300’s. 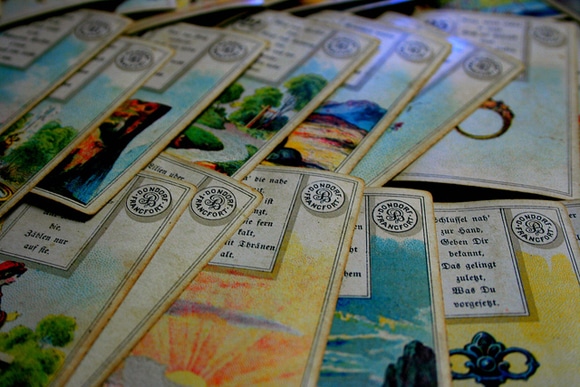 The creator of the Lenormand cards was said to be Marie Anne Adelaide Lenormand (born 1772 died 1843) from Normandy, France. She was orphaned at an early age and was educated in convents.

The legend has it that Marie arrived in Paris in 1786. She was a gifted psychic who advised the rich and famous throughout Europe. Lenormand’s clients included royalty and many famous people of the time. She was a psychic to the French Revolution leaders (Marat, Robespierre), Russian Tsar Alexander I and Napoleon I and Empress Josephine.

She was a controversial writer and was thrown into prison from time to time. Lenormand claimed to have been taught her card reading skills from Gypsies. Her uniquely designed tarot cards were created with her student Madame Breteau. Breateau published the deck 2 years after Lenormand died.

She had a long career in fortune-telling and was an author of over 12 books. She is said to have left over 500,000 francs when she died. Marie may have been the most famous card reader of all time. 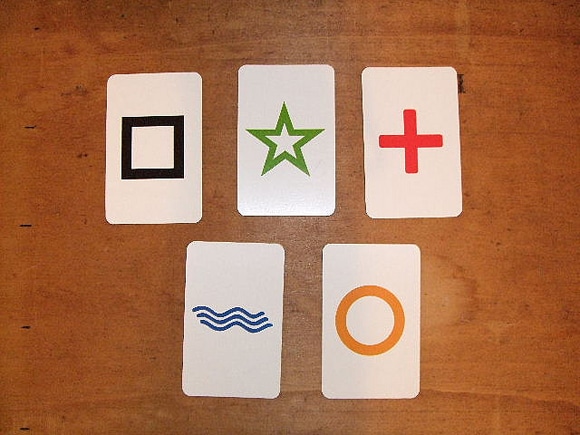 Zener cards are not really psychic cards, although they do have metaphysical symbols. They were developed to test for extra sensory perception (ESP). These 5 simple symbol cards were developed by psychologist Karl Zener in the 1930’s. Zener and his associate, parapsychologist J. B. Rhine, used them extensively in their studies.

The Zener cards are: a circle (one curve), a cross (two lines), waves (three vertical wavy lines), a square (four lines), and a star (five-pointed). Each deck comes with 25 cards, five of each design. 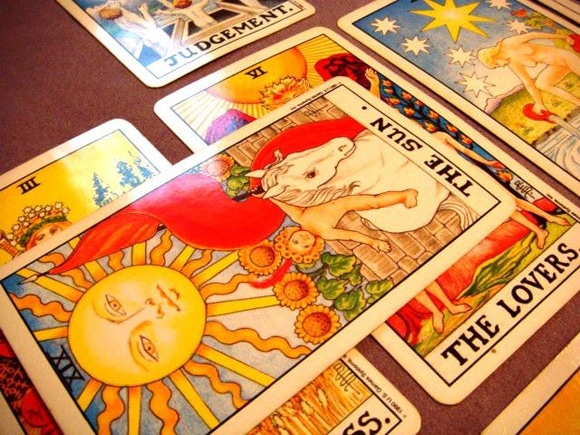 Arthur Edward Waite and Pamela Colman Smith met in 1903, at the mystic society The Order of the Golden Dawn. Waite was a spiritual scholar and one of the Grand Masters of the Order.Smith was a talented actress and artist.

Waite’s intentions came alive with Smith’s detailed designs. The printing press made wide distribution possible. The deck includes 78 cards with designs for number or pip cards, as well as the minor and major arcana.

Pamela Colman Smith’s role in the card initially was minimized. The tarot deck was named the Rider-Waite Deck after Arthur Waite and Rider, who was the publisher. But it was her images that remain some of the most popular and powerful metaphysical symbols.

These standard decks, shuffled before each reading, offer an infinite number of alternative interpretations based on how the cards fall. This is the most famous tarot deck of all time.

Many advisors on Psychic Elements use psychic cards as a divining tool to enlighten those who seek the truth about their path. The power of the tarot promises that more will be revealed to those seek their truth.