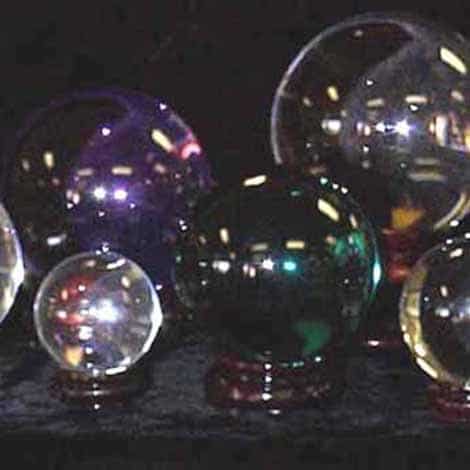 Crystal balls have been used for at least four thousand years for divination. The art of gaining information for looking into crystal is called “scrying.” Most people associate a gypsy reading crystal ball as a symbol of mystical power. Other people may remember the scene in the Wizard of Oz movie showing the witch watching live action scenes of Dorothy trying to get to Emerald City. The reality is that crystal balls do not possess actual power, nor do they show scenes like you would see on a television foretelling the future.

However, a psychic, while in a trance, may see different images in his or her brain while in a light trance. These images can be concrete pictures, symbols or vague impressions. What these images convey are information about situations you are facing and guidance of how to resolve your problems.

Other crystals balls have their uses as well. Amethyst balls channel spiritual energy, and are effective in communicating with spirit guides. They are also helpful in interpreting dreams. Rose quartz balls are helpful in issues of emotions and the heart. Rose quartz can help in healing of emotional hurts and fosters forgiveness. Smoky quartz helps in grounding and clearing negativity. Obsidian is a power crystal that aids in reflecting what is in the souls of self and others. Malachite is useful in revealing past-life connections. Lapis, Sodalite and Dumotierite energize psychic attunement. Yellow stones, tiger-eye, yellow citrine, topaz, ametrine and amber reveal the brighter side of an issue and warms the heart. All of these stones are available as balls, though some are more expensive than others.

The History of Crystal Ball Reading

The use of crystal balls continued past the Druidic tradition. Dr. John Dee (1527-1608), a royal advisor to Queen Elizabeth I, was a scientist, astronomer, mathematician, and geographer who was also a hermetic philosopher involved in alchemical studies. He used crystal balls in his work, which he believed would aid in communication with angels. A quartz ball that once belonged to Dee now resides in the British Museum.The ancient Greeks used reflective surfaces such a pools of waters to help with divination. Two thousand years before the birth of Christ, British Druids used crystal balls for divination. Transparent Beryl, a natural gemstone that comes in all colors was used as an early crystal ball but In the Middle Ages crystal balls shifted from being shaped in beryl to crystal which is more reflective.

Crystal balls were used in other areas of the world as well. The third largest crystal ball in the world, now housed in the Penn Museum, weighs fifty-five pounds. It was created for the Empress Dowager Cixi (1835-1908) during the Quing Dynasty in the 19th century.

How does a Crystal Ball Reading Work?

Some readers claim that nothing can be seen in a crystal ball and believe they act as a focus for meditation. Others, such as Alexandra Chauran, the author of Crystal Ball Reading for Beginners, tells us that occlusions in the crystals can form symbols when you are in are in a light trance. Some people have describe the experience of being “drawn into” the orb, feeling a bending of time while gazing into the ball. However the crystal ball is used, it is clear that it is a tool to focus and direct the intuitive and psychic abilities of the reader.

Regardless, seeing things in crystal balls may not be as mystic as some people believe. Crystals carry an electric charge called piezoelectricity that can be converted into electrical signals. This electric charge is the very reason that cut crystals are used watches, TV and radio transmitters. Crystals can also provide oscillations that can drive very accurate clocks. A quartz crystal clock will not vary more than a thousandth of a second per day.

The size of ball preferred varies greatly among those who read crystal balls. Some use a "palm ball" of a few inches in diameter that is held in the hand. Other readers prefer a larger ball mounted on a stand.

Is A Crystal Ball Reading Right For You?

Crystal balls are fascinating. Their structure and piezoelectric properties make them great tools for looking into life’s secrets. The psychic who reads crystal balls do tap into some mysterious energies than can provide guidance for many of the questions you have.