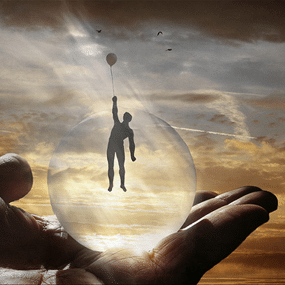 Clairsentience is a form of psychic intuition. The prefix "clair", means "clear", and the suffix "sentience", means "feeling". The word reflects the psychic's ability to hone in on the on the energy of otherworldly realms. Clairsentients sense, rather than think through the information they receive. They are particularly attuned to their intuitive, or what people call "gut feelings". They can sense when something of import is about to occur, when someone is hurt, sick or passed from this life. Often they sense the positive or negative energies given off from other people.

Strong smells or tastes accompany the impressions received by a clairsentient. When there is a disturbance in the crust of the earth, or the oceans, a clairsentient can experience a variety of symptoms. Before a dramatic event, a clairsentient can feel a nervous excitement, feelings of unease or dread or a sinking or sick feeling in their stomach. During a strong earthquake, no matter where it is in the world, the clairsentient can feel off centered and dizzy. They may literally have to grip a piece of furniture or a wall to keep from falling.

Many clairsentients learn to hide their sensitivities from others. The odd sensations they feel, but most others don't, may be misinterpreted as hypochondria or a type of hysteria. Like the ancient seer of legend, Cassandra, they are often not to taken seriously by other people.

Because of their broad breadth of vision, they can gather information that other people can. Through extending their senses through psychometry they can gather information from touching objects, especially from the personal possessions of others. They can see the life, traumas and events of a person through touching their items. This is the sense that is most often used by police departments in trying to solve violent crimes. Sometimes these impressions manifest as vision that may quickly evaporate.

Though psychics have been with us since the beginning of human existence, the awareness and naming of different psychic abilities seem to have started in the modern era. The start of the Spiritualist Movement in the middle nineteenth century facilitated the awareness of different psychic gifts. During the years of the later nineteenth century and the first couple decades of the twentieth there was much experimentation with paranormal phenomenon. During this time, psychics explored communication with those beyond the veil, learned about and started working with spirit guides, and developed different skills in working with psychic energies. However, it wasn't until the New Age Movement of the Seventies and Eighties when different psychic gifts were defined, among them clairsentience. Though it is difficult to find a single point of reference for this phenomenon, clairsentience was defined as a separate gift from other forms of psychic abilities.

How Does Clairsentience Work?

While we all know we have a physical body, in truth, we have other energy forms, subtle bodies that interact with our flesh bodies. These bodies are the emotional body, the mental body and the spirit body. It is interaction with these etheric bodies that differentiate us from the non-sentient species that share our planet with us. These etheric bodies, while they intersect with our physical bodies, exist in non-physical dimensions, where the knowledge of the Universe exists without limits. This is why we often hear that we are all psychic. Clairsentient psychics are particularly attuned to the energies of these etheric bodies.

Some sources incorrectly identify a clairsentient as someone who communicates solely with spirits. While a clairsentient may communicate with a discarnate intelligence, their far-flung abilities allow them to reach out and draw in information from planes of existence that most humans don't even imagine.

At times it seems that people with a direct pipeline beyond the veil of our earthly existence have more answers than we do. A clairsentient psychic can be helpful in several ways. First, a clairsentient can feel the issues that trouble you most, helping you clarify the issues that need your attention. For instance, you may be troubled by the actions of a spouse, but in working with the clairsentient, he or she may point out an incident from the past that mirrors your spouse's behavior. Or the clairsentience may pick up on some disturbing energies in your home that need to be cleared. These are just examples as the wide-ranging usefulness of the clairsentient's abilities that can help you with a variety of issues.

Edit: If you have been having clairsentient experiences, feel free to join our Awakening Psychics Facebook group! Here everyone is learning how to understand and grow their psychic abilities, and your story can help comfort others who  are going through the same thing. ♥