Ghosts and Spirits: Questions and Answers

We’re going to try to answer some of the most common questions about ghosts and spirits. We don’t have all the answers; apparitions, by their very nature, are tough to pin down. We’ll do our best.

What is a Ghost?

Ghosts and spirits are supposedly the souls or earthly representations of those who have passed away. Not everyone leaves a ghost behind. Most people pass peacefully and never bother the living again. Some may be recalled by clairvoyants to reassure grieving relatives.

Are Ghosts and Spirits Real?

That depends who you ask. Anyone who has experienced the terrifying activity of a poltergeist will attest to the existence  of spirit or ghost phenomena. Some paranormal investigators have recorded a definite and unexplained change in energy and temperature at haunted locations.

Human beings have believed in hauntings since time immemorial. And there is such a huge body of anecdotal and photographic evidence that even if 99 percent were discounted, it would still leave an awful lot unexplained.

Then there are other things, like ghostly messages. Who left the word ‘Beware’ written in the snow in Debbie’s yard? There were no footprints around the letters. Later that night, three children turned up on her front porch. They’d run from their house just around the corner where their parents were in a fight. Not long afterward, the father hammered on the door shouting for the children. Remembering the warning, Debbie told him she hadn’t seen them and he left. Eventually the mother phoned and came to collect her children accompanied by the police. The father had threatened her with a knife, and he still had it with him when he came to Debbie’s door. Who warned Debbie? She is convinced her long-passed grandfather is looking out for her, as ‘beware’ was one of his favorite words.

It is irrefutable that psychic clairvoyants are able to communicate with spirits, otherwise they would not be able to give information that only the dead person would know.

What are Ghosts Made Of?

The standard reply is ‘energy’. Or a concentration of electro-magnetic energy. The old theory that there is a substance called ‘ectoplasm’ has long been debunked and dismissed. People who say they have seen ghosts and even walked into/through them, report that there was a ‘thicker’ feeling to the air, as if molecules of air were compressed somehow. However, nothing has been proved.

What Does it Mean If I see a Shadow Spirit?

That depends if it means something to you. It could have been a trick of the light, or your eyes adjusting to the darkness. It may be a shadow cast from outside. Those who have seen shadow spirits and who are convinced that what they saw was an actual spirit put forth various reasons for the visitation.

Shadow spirits have been described as disturbances or ripples in time. That for a brief moment two times collide or there is a ‘leak’ from one time to another. So what you might be seeing is actual people living their lives in a previous or future time. It’s possible, of course, that you may appear as a shadow spirit to someone else.

Why Do Some People See Ghosts While Others Don’t?

It’s probably down to sensitivity and awareness. Ghosts may be all around us, but unless we are tuned in we won’t experience them. Often, a heightened emotional state might precede a ghost sighting. Our own vibrational energy is charged and intensified when we become emotional, and it makes no difference if it is positive or negative emotion.

Who Reported the First Ghost Sighting?

No-one knows. Tales of ghosts have been a folklore staple since humans could communicate. No doubt, the ancients loved a good ghost story as much as we do today. It’s impossible to know if they actually saw ghosts or not.

Mystics throughout the ages have called upon the spirits of the dead to assist them in their work. From demons to angels, man has always believed in the possibility of other beings sharing the world with us.

What Should I Do if I See a Ghost or Spirit?

Nothing. They can’t harm you. The most harm comes from the fear you feel. If you panic and scream and become distraught you put your body into shock. The trouble is, the sight of anything that doesn’t ‘fit’ in your reality is capable of promoting a huge stress reaction. If it’s possible, stand still and breathe slowly. In many cases the specter will vanish.

Can Spirits Harm You?

As above; they can’t hurt you because they have nothing to hurt you with. The most danger might occur with a poltergeist haunting where objects can be physically thrown at you. If you suspect poltergeist activity, leave the room. If possible leave the home all together and seek professional help. In may cases, poltergeist phenomena can be attributed to psychic disturbances in human beings. 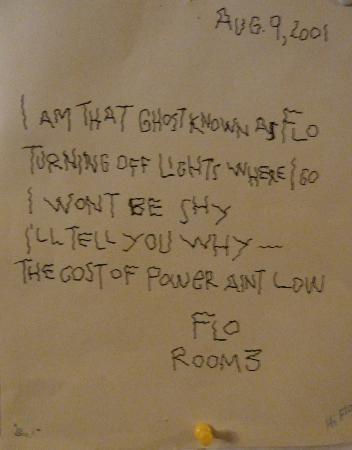 This photo of Flo's note at the 1859 Historic National Hotel is courtesy of TripAdvisor. Flo is obviously aware of the cost of electricity these days.

Can Ghosts be Friendly?

Apparently, yes. The 1859 Historic National Hotel in Jamestown, CA., celebrates the fact that it is haunted. One of their ghosts is ‘Flo’, the spirit of a beautiful young woman called Flora, whose fiancé was killed in the town during their stay at the hotel. They were staying in separate rooms and were happily preparing for their marriage. A few days later Flora was found dead in her room as a result of heart failure. Flo appears in various locations around the hotel and is a generally cheerful presence, although she has been reported to cause a little mischief at times. Guests are advised to say hello, smile and wish her ‘Good day’.

Have You Seen a Ghost?

Please share your ghostly experiences with us. We’d love to read them. Meanwhile, if there’s someone you want to contact who has passed, get in touch with one of our spirit-friendly psychics.

Getting the Most out of a Live Psychic Reading

“Space and time are not the conditions in which we live; they are simply modes in

Do You Love Him Too Much? Or Is It Something Else Disguised as “Love”?

"The most painful thing is losing yourself in the process of loving someone too much,

“No one saves us but ourselves. No one can and no one may. We ourselves

Positive affirmations are a combination of the power of the mind-body-spirit dynamic. Soul wishes are activated when they are voiced. The conscious mind impresses the unconscious to effect changes, through repetition (or meditation) of a key phrase.

Made with in Los Angeles
Introductory offers for new customers only. You must be 18 years of age or older to use Psychic Elements.
Facebook-f